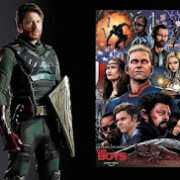 Amazon Prime Video released the teaser of its action-thriller web show The Boys Season 3 on its social media platform.

The teaser of The Boys Season 3, which will be available for streaming on June 3, sees The Homelander all smiles while Starlight stood beside him. He is all smiles during the photoshoot but he gets angry with each second.

The Boys tells the story of a group of individuals taking on heroes/villains with special powers and agendas to show themselves as mankind’s saviour. Funded by Voight organization, the mutants stage disasters as well as terrorist attacks to be the apple of the public’s eye.

It is pertinent to mention that Homelander was being blackmailed by Queen Maeve while The Homelander’s partner-in-crime Stormfront got incinerated after Bill Butcher’s son Ryan uses his superpowers in a fit of anger at the end of the second season.

This resulted in Bill Butcher’s wife Becca Butcher getting killed as well.

Karl Urban plays the leading role of protagonists Billy Butcher while the role of his sidekick Hughie Campbell is being played by Jack Quaid. Erin Moriarty will be seen as …read more