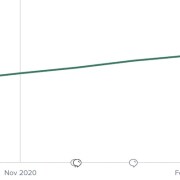 Indian startup Inshorts, which operates an eponymous news aggregator service, has raised $60 million in a new financing round as its last year’s bet — launch of a new social media app called Public — takes off, the startup confirmed to TechCrunch on Thursday.

Vy Capital led the new round in Inshorts, which has raised $140 million in the last one year. The new investment values the startup at about $550 million, up from about $250 million valuation in $41 million fundraise in March and $125 million valuation in September last year, according to three people familiar with the matter.

Azhar Iqubal, co-founder and chief executive of Inshorts, confirmed the size of the round and lead investor but declined to comment on the valuation. The startup counts Addition, Tiger Global, SIG, A91 and Tanglin Venture Partners among its investors.

“The world is changing every minute, and each one of us has an inherent desire to remain updated about these changes,” he said in a brief statement. “Both Inshorts app and Public app are aimed to help some of these people in their quest of keeping themselves informed and we are thrilled to have Vy Capital join us in our journey.”