You are here: Home / Blog / Uncategorized / ProGrade Versus Sony CFexpress Type A Cards: Is There a Difference? 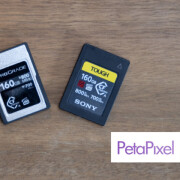 ProGrade Versus Sony CFexpress Type A Cards: Is There a Difference?

ProGrade Digital just released the first CFexpress Type A cards that aren’t made by Sony and while they aren’t “cheap” by any stretch of the imagination, they are more affordable than Sony’s offering. But does that discount come at a performance cost?

At the time of publication, CFexpress Type-A memory cards were only used by Sony in a few of its newer cameras like the Alpha 1. The format is much smaller than a CFexpress Type B card and while Type A cards will never be as fast, Sony chose them for its line of cameras because they have a secondary benefit: the small size lets them share a card slot that can also be used with legacy SD cards.

SD cards are actually bigger than CFexpress cards, which let Sony build a slot in both its cameras and its CFexpress card reader that lets the one slot pull double duty. For photographers, this means that Sony could support faster read and write speeds to get the most out of its new cameras while …read more