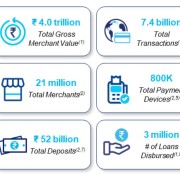 Digital payments giant Paytm, one of India’s most valuable startups, plans to raise up to $2.2 billion in an initial public offering, it said in draft papers submitted to the country’s market regulator on Friday.

The Noida-headquartered firm — backed by Alibaba, Berkshire Hathaway, and SoftBank among others — said (PDF) it will issue new shares worth $1.1 billion and offer sale worth of $1.1 billion.

The startup, which competes with PhonePe and Google Pay in the world’s second largest internet market, plans to use the fresh capital of $577 million to broaden its payments services offering and about $269 million to enter into new initiatives and explore acquisition opportunities, it said.

Paytm, which was launched in 2009 to help users easily make digital payments from their phones, has expanded to a wide-range of services in the past decade. Today it operates a payments gateway, e-commerce marketplace, ticket booking, and also sells insurance and digital gold. In several of the categories where it operates, Paytm is a market leader.

The startup, formally known as One97 Communications and last valued at $16 billion, platform has amassed over 333 million users, 114.3 million of whom transact annually, and has onboarded over 21 million merchants, …read more