You are here: Home / Blog / Uncategorized / Oyo’s revenue surged in FY19, but loss widened, too 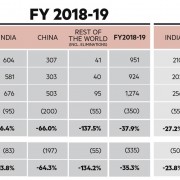 Oyo’s revenue surged in FY19, but loss widened, too

Budget-lodging startup Oyo reported a loss of $335 million on $951 million revenue globally for the financial year ending March 31, 2019, and pledged to cut down on its spending as the India-headquartered firm grows cautious about its aggressive expansion.

The six-year-old startup’s growing revenue, up from $211 million in financial year ending March 31, 2018 (FY18), is in line with the company’s ambitions to be in a clear path to profitability this year, said Abhishek Gupta, Global CFO of OYO Hotels & Homes, in a statement.

The startup, which today operates more than 43,000 hotels with over a million rooms in 800 cities in 80 nations, said its expansion to China and other international markets contributed to the loss. Oyo entered China in 2018, and it has already become its second largest market.