You are here: Home / Blog / Uncategorized / Netflix is reducing its traffic on ISPs by 25% in India 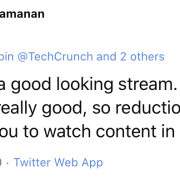 Netflix is reducing its traffic on ISPs by 25% in India

Netflix said on Tuesday that it is lowering its traffic on network providers by 25% in India for a period of 30 days, following a similar move in Europe in a bid to reduce the congestion on internet pipelines.

The American giant said that despite lowering the strain it puts on internet service providers, it will “maintain the quality” of its service. Amazon Prime Video said it has also started to lower the data consumption that streaming takes up on its platform, while local services Disney’s Hotstar, Times Internet’s MX Player and Zee5 say they are working to implement similar measures.

Vijay Venkataramanan, Director of Post-Production at Netflix India, offers clarity on how reducing the traffic would impact the quality of video streams.

“Given the crisis, we’ve developed a way to reduce Netflix’s traffic on telecommunications networks by 25% while also maintaining the quality of our service. So consumers should continue to get the quality that comes with their plan – whether it’s Ultra-High, High or Standard Definition. We believe that this will provide significant relief to congested networks and will be deploying it in India for the next 30 days,” Ken …read more