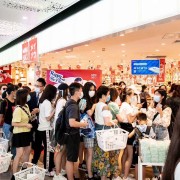 Miniso, the Japanese-looking variety store from China, sees shares jump in US IPO

Investors are jumping aboard a value store chain that is bringing Japanese-inspired lifestyle goods to consumers around the world. The company, Miniso, raised $608 million from an initial public offering in New York on Thursday. It debuted at $24.40, above its pricing range of $16.50 to $18.50, and finished the day up 4.4%.

Everything about the seven-year-old firm — from its name, branding, products, to its website — suggests it is Japanese, except in fact it was born and bred in China. It bears a striking similarity to Muji, Uniqlo and dollar store Daiso in many ways, and has been called a copycat of its Japanese lifestyle predecessors.

The company, backed by Tencent and Hillhouse Capital, seems to intentionally, albeit misleadingly, brand itself as Japanese. In its public messaging, such as this press release and its country-specific site, it describes itself as a firm co-founded by Chinese entrepreneur Ye Guofu and Japanese designer Miyake Junya in Tokyo in 2013. But its Japanese origin is nowhere to be seen in its IPO prospectus.

Instead, the document lists the southern Chinese metropolis Guangzhou as the firm’s first base and Ye as the sole founder and current chief executive. All …read more

 Pear hosted its invite-only demo day online this year; here’s what you might...
