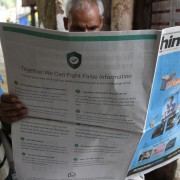 At the beginning of the previous decade, Facebook had a tiny presence in India. It had just started to slowly expand its team in the country and was inking deals with telecom operators to make access to its service free to users and even offer incentives such as free voice credit.

India’s internet population, now the second largest with more than 500 million connected users, itself was very small. In early 2011, the country had fewer than 100 million internet users.

But Facebook ended up playing a crucial role in the last decade. So much so that by the end of it, the social juggernaut was reaching nearly every internet user in the country. WhatsApp alone reaches more than 400 million internet users in India, more than any other app in the country, according to mobile insight firm App Annie.

This reach of Facebook in India didn’t go unnoticed. Politicians in the country today heavily rely on Facebook services, including WhatsApp, to get their message out. But it has also complicated things.

Rumors have spread on WhatsApp that cost lives, and politicians from both the large political parties in India in recent weeks …read more