You are here: Home / Blog / Uncategorized / Chinese apps are losing their hold on India to local developers 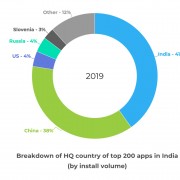 Chinese apps are losing their hold on India to local developers

Apps from Chinese developers have been gaining popularity on Indian app stores for sometime. Last year, as many as 44 of the top 100 Android apps in India were developed by Chinese firms.

But things have changed this year as local developers put on a fight. According to app analytics and marketing firm AppsFlyer, Indian apps as a whole have recaptured their original standing.

41% of top 200 apps in Indian editions of Google’s Play Store and Apple’s App Store in Q2 and Q3 this year were developed by Indian developers and local firms, up from 38% last year, the report said. Data from App Annie, another research firm, corroborates the claim.

“This uptick happened chiefly at the expense of Chinese apps, which fell from their lead position to 38% from 43% in 2018. Altogether, Chinese and Indian apps make up almost four-fifths (79%) of the list,” the report said.

The shift comes as scores of Indian firms have launched payments, gaming, news, and entertainment apps in the last year and a half, said AppsFlyer, which analyzed 6.5 billion installs in the second and third quarters of this year.