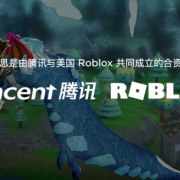 The promise and challenge of Roblox’s future in China

In a much-anticipated move, California-based gaming firm Roblox filed to go public last week. One aspect driving the future growth of the children- and community-focused gaming platform is its China entry, which it fleshes out in detail for the first time in its IPO prospectus.

Like all gaming companies entering China, Roblox must work with a local publishing and operations partner. And like Riot Games, Supercell, Epic Games, Activision Blizzard, Ubisoft, Nintendo and many more, Roblox chose Tencent, the world’s largest gaming firm by revenue, according to Newzoo.

The partnership, which began in 2019, revolves around a joint venture in which Roblox holds a 51% controlling stake and a Tencent affiliate called Songhua owns a 49% interest. The prospectus notes that Tencent currently intends to publish and operate a localized version of the Roblox Platform (罗布乐思). Internationally, the platform allows people to create games and play those programmed by others.

User-generated content is in part what makes Roblox popular amongst young gamers, but that social aspect almost certainly makes its China entry trickier. It’s widely understood that the Chinese government is asserting more control over what gets published on the internet, and …read more