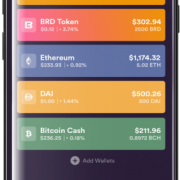 Mobile cryptocurrency wallet BRD announced today that it now has more than six million users worldwide, thanks to strong growth in India and Latin America. With this momentum, the company expects to reach 10 million users by early 2021.

Founded in 2015, Zurich-based BRD also said it now adds about one million new users every two months, after initially taking more than four years to hit the one million user mark. It reached 550,000 monthly active users at the beginning of July. Co-founder and chief executive officer Adam Traidman attributes the increased interest in cryptocurrency, especially among first-time users, to the COVID-19 pandemic.

“It’s causing a lot of people who are staying at home and sheltering in place to reconsider a lot of fundamental questions about their life and family right now,” he told TechCrunch. “It’s causing a lot of thinking about money and finances. People have had a lot more time over the last six months to look at their investments and as a result of that, we found that for cryptocurrency in general, but especially for BRD’s business, we’ve been growing dramatically.”

He added that BRD, which …read more