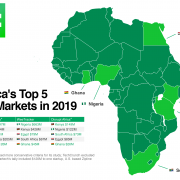 African startups have another $100 million in VC to pitch for after Novastar Ventures’ latest raise.

The Nairobi and Lagos based investment group announced it has closed $108 million in new commitments to launch its Africa Fund II, which brings Novastar’s total capital to $200 million.

With the additional resources, the firm plans to make 12 to 14 investments across the continent, according to Managing Director Steve Beck. He spoke to TechCrunch on Novastar Ventures’ plans for the new fund.

A notable update to Novastar’s VC focus is geographic scope. The firm was originally co-founded in Kenya by Beck and British investor Andrew Carruthers and built its first portfolio largely around companies based in East Africa. Novastar Ventures made 15 investments with its first fund, including companies such as Uganda and Kenya focused energy startup SolarNow and agtech venture M-Farm.

“The second fund is basically the same strategy as the first, but…the biggest difference is that we opened up a second front in West Africa — more particularly to be in and around the entrepreneurial system in Lagos,” Beck told TechCrunch on a call.