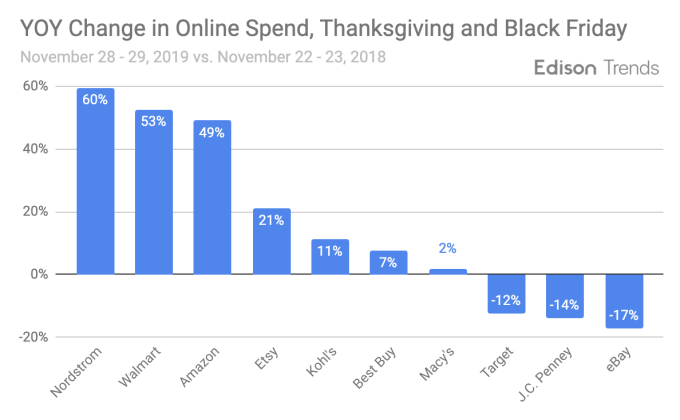 Following swiftly on the heels of a Thanksgiving that broke records with $4.2 billion in online sales, Black Friday also hit a new high, although it just fell short of predictions. According to analytics from Adobe, consumers spent $7.4 billion online yesterday buying goods online via computers, tablets and smartphones. The figures were up by $1.2 billion on Black Friday 2018, but they actually fell short of Adobe’s prediction for the day, which was $7.5 billion.

Salesforce, meanwhile, said that its checks revealed $7.2 billion in sales (even further off the forecast).

A full $2.9 billion of Black Friday sales happened on smartphones. These conversions are growing faster than online shopping overall, so we are now approaching a tipping point where soon smartphones might outweigh web-based purchases through computers.

“With Christmas now rapidly approaching, consumers increasingly jumped on their phones rather than standing in line,” said Taylor Schreiner, Principal Analyst & Head of Adobe Digital Insights, in a statement. “Even when shoppers went to …read more