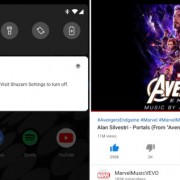 Shazam, the Apple-owned app that helps users identify songs playing around them, can now recognize songs you’re listening to through your headphones when using an Android phone or tablet.

Acquired by Apple for $400 million last year, the company introduced a feature called ‘Pop-Up Shazam‘ to its Android app this week that, when enabled, works with any other Android app to track and identify songs playing externally or internally on the phone.

It’s a feature that many users have requested for years. Prior to this, when a user would chance upon a music track in say a YouTube video, they only had two inconvenient ways to shazam the song. They could either unplug the earphones from the phone and let the audio play through the built-in speakers, or draw an earpiece close to the mic of the phone.

The new feature enables Shazam to track the audio signal beaming off of other apps, thereby not completely relying on just output from the surrounding and a phone’s speaker. The app is tapping the audio signal by using a persistent notification that floats around and could be dragged — like the ones from Facebook Messenger — and can be activated …read more