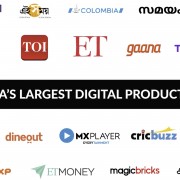 The aggressive push by Silicon Valley companies and Chinese firms to win India, one of the last great growth markets, has decimated many local businesses in recent years. With each passing day, Amazon is closing in on Walmart-owned Flipkart‘s lead on the e-commerce space. Uber is fighting with Ola for the tentpole position of the ride-hailing market; and Google and Facebook dominate the ads business, to name a few. But a handful of companies in India have not only survived the growing competition, but they have built businesses that are positively thriving.

Media conglomerate Times Internet, one such company, says that its properties now reach 110 million users each day and 450 million users each month. To put this in context: Facebook and Google have about 300 million monthly active users in India. Facebook, which is mired in controversy over the spread of misinformation on WhatsApp in India (and other regions), has not revealed its growth in the nation in last two years. But in a marketing pitch, the juggernaut says its family of apps (marquee Facebook, WhatsApp, and Instagram) reach 350 million users in the nation …read more