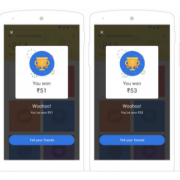 Google launched its Tez paymen app in India a year ago, and now the company is giving the service major push into retail as it prepares to expand it to other parts of Asia and beyond.

The app itself is being rebranded to Google Pay — bringing it in line with Google’s global payment service, which is available in 20 countries — but there are more tangible updates on their way. Most notably, Google is plotting to turn Google Pay into an all-encompassing payment app for India.

The service started out in bank-based payments before adding bill and utility payments and messaging, but now Google is planning an extended push into retail, both online and offline. Economic Times recently reported on the rebrand and expansion.

The service already supports payments with some 2,000 apps and websites, including Goibibo and RedBus, but it is adding to that number and planning ‘deep’ integration with partners such as Uber and ticketing service BookMyshow. Google is also focusing on offline, and it said it is in the process of adding in-store payment support with a range of retail brands that will …read more